Cory Williams – L39ION of LA changing up US cycling

I’ve got a really cool guest for you on the pod this week, American Cory Williams. Hailing from South Central L.A. (and weighing in at 65 kilos…), Cory is a hugely successful racer and regular winner on the U.S. criterium scene, as well as a founder of the L39ION of Los Angeles racing team.

Growing up in a cycling-mad family (their father, Calman, competed internationally for Belize) Cory and his two brothers, Justin and CJ, spent their youth racing up to four criteriums a week in California.

The brothers soon recognised that traditional cycling races and media weren’t hitting the mark with an audience who were used to following faster-paced US sports like NFL & NBA. So, instead of just trying to follow the traditional pathways of cycling over in Europe, they set about trying to make the changes they wanted to see in their home country.

Starting off by strapping a Go-Pro to Cory’s helmet, and filming from inside action-packed criterium races, the brothers soon built a huge following online while also winning big on the road.

Since then, things have taken off, the brothers have been dominating the US crit scene, and L39ION of LA has grown to be one of the most popular teams on the planet. The team has one of the coolest kits and most unique vibes out there, and in 2021 through the ‘Into the Lion’s Den’ crit in Sacramento – started to get involved in organising events.

If you haven’t seen Cory’s videos, they are well worth checking out at nationsnumber1beast on YouTube – they are fun to watch, have some great insight and of course, they are filled with characters you’ll love to follow.

I had a great chat with Cory about his journey, from the early days of being an outsider – putting his lycra shorts on to go training after school in South Central LA, through his love of film and racing, to breaking down how his team dominate in the races they ride. We also spoke about his current plans to try to create a new race series in the US, as well as his famed love for Zwift.

I hope you enjoy the insight!

Paris-Roubaix Caps are back & available to shop. Get your cap collection growing – jump over to our online shop to grab one now. 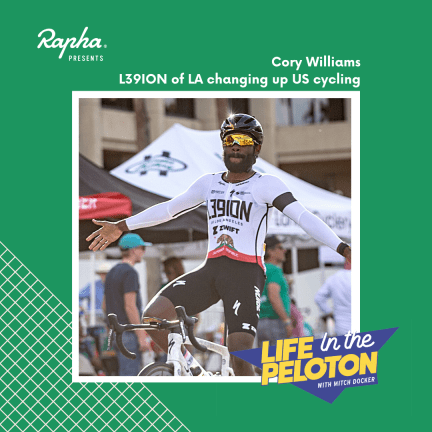