Joe Dombrowski – For the love of the Giro d’Italia

It’s Giro time! This week I caught up with a former teammate of mine, Joe Dombrowski, as he finished off his preparations to head to Hungary to start his seventh Giro d’Italia. The Italian Grand Tour is a really special race to be a part of and Joe is a true Giro specialist. We rode the race as teammates in 2018, and it was obvious to me the affiliation this former winner of the U23 race has with all things Giro. We caught up on Joe’s own career and highlights from the race, as well as our impressions and thoughts on probably the most beautiful race of the season.

With the Giro d’Italia kicking off this weekend, I thought it would be great to chat with a rider who has built his career on the Corsa Rosa. Joe Dombrowski is the archetypal Giro rider: he’s a former winner of the U23 or ‘Baby’ Giro, he’s built for the mountains, loves it when a stage goes uphill out of the neutral, and in 2021, after nearly ten years of trying, he finally became a stage winner there.

For Joe, it makes sense that the Italian Three-week Race would always be a special event and form a key focal point of his racing career. As he points out though, “If the Tour is the Superbowl, then the Giro is college football”, and it’s true that making a career as a Giro specialist doesn’t come with the glory of doing the same thing at the Tour de France. But for the connoisseurs of the sport, the Giro is probably the stage race of the year.

We discussed what it meant for him to be able to win the U23 race as a young rider, and how he has carried that reputation into his career as a professional. He also took me through the highs of his stage win in 2021, as well as the lows that followed when he crashed out in the very next stage.

We delved into the aspects of the racing at the Giro that make it so unique, and so hard at the same time. We also managed a bit of a laugh at some of the many uniquely frustrating quirks that can happen outside of the racing there, which, trust me, can sometimes be the things that break you at this race.

The Giro is a race that really is everything for Joe, so I was really happy to get this pod in with him. It also reminded me of my own love-hate relationship with the Giro. It’s a beautiful race, and I’m really excited to follow this year’s edition… from a distance.

I hope that this pod wets a few appetites out there and gets you guys in the mood to follow along for the next three weeks.

33:57 to end – Changing teams & Joe’s ambitions for the upcoming Giro

Check out the highlights of Joe’s Giro 2021 stage win below:

Paris-Roubaix Caps are back for the classics!  Jump over to our online shop to grab one now. 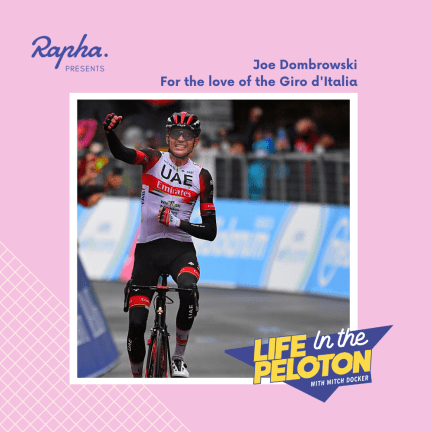