Rapha presents Life in the Peloton

Peta Mullens is an Australian star of track and field – and anywhere else you can find to put a bike race on. From MTB to track to CX to road: if you can name the discipline then she’s probably won a national title in it. I spoke to Peta about her diverse career, making tough decisions, as well as her current role as an athlete and director of one of Australia’s most exciting teams, Roxsolt Liv SRAM.

I have loved following the women’s racing across the Australian Summer of Cycling this year. From the Bay Crits at the start of January to the Santos Festival of Cycling which concluded a couple of weeks ago, the fantastic racing kept me glued to the TV over summer.

One of the standout teams has been Roxsolt Liv SRAM. After Nicole Frain won a memorable National Road Race title in Ballarat, the team followed up by helping their new National Champion onto the final podium at the Festival of Cycling in Adelaide, whilst placing two teammates inside the top ten.

For this episode of the podcast, I spoke to one of the driving forces of this team whose own story in cycling is as unique as her presence is inspirational for the athletes around her.

Known simply as Mom by her teammates, Peta Mullens has been a national champion on the road, track, MTB and cyclo-cross. A well-respected figure in Australian cycling she has been a pro on the road and has represented Australia in multiple disciplines over the years in World Championships and the Commonwealth Games.

Peta is without doubt a natural athlete. Beginning her sporting career by going on twenty-plus kilometre runs with her dad after school, she switched to track cycling as a youngster and simply never looked back.

Her story is interesting to me because, as you’ll learn, she has always remained in control of her destiny on and off the bike, often refusing to bow down to pressure, despite people’s expectations. She explained to me what drove her to make decisions to step away from the sport at times, and how changing disciplines kept her passion alive.

These days she is a director and athlete at the Roxsolt team, where she leads by example on and off the road, and she isn’t ruling out trying to take the team all the way to the biggest races in the world.

It was great to chat to Peta, I found hers a fresh perspective on managing a cycling career & inspiring in her resilience and passion for the sport.

She was also good enough to explain to me what ‘YOLO‘ means and why that underpins her and her team’s philosophy.

I hope you guys also enjoy her story and her take on life in the peloton.

Stay tuned next week for her follow up episode of Talking Luft!

Listen to this series on the Life in the Peloton website, at Spotify, Apple Podcasts, GooglePlay, Stitcher, Youtube or your favourite pod app.

Listen to our short spin off series Talking Luft presented by Rapha – much like DVD Extras, every second week.

LITP Cycling Caps: Jump over to our online shop to grab one. 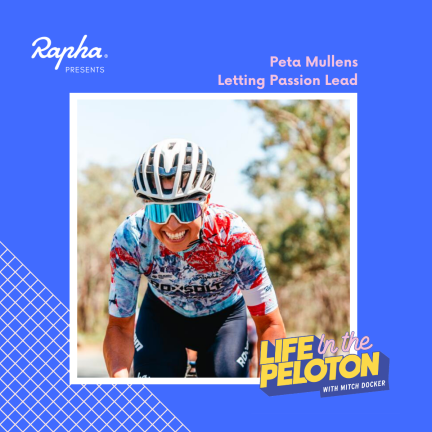