Stuart O’Grady – The Pioneer of the New Generation. Ep2. S7

Rapha presents Life in the Peloton

Stuart O’Grady is an absolute legend of the sport: He’s a Roubaix winner, an Olympic Gold medallist, a trailblazer for Aussie pros in Europe, and now race director of Australia’s top cycling event, the Tour Down Under. In this episode, we go in-depth on all of this and more. It’s a fascinating insight into the career of one of the most accomplished people in cycling.

It’s January, I’m in Australia; it’s Tour Down Under time.

As we all probably know, the World Tour peloton won’t be at the TDU this year, and I’m enjoying my first January in a long time not having to think about racing. However, I thought who better to bring on the pod than the legend himself, Adelaide’s Stuart O’Grady.

Stuey wasn’t just a huge inspiration, for the generations of Australian riders who followed in his wheel tracks, he was a real pioneer.

Stuey went to his first Olympics as an eighteen year-old before turning pro with the French Gan team in the mid-nineties. In just a few years he went from being a risky signing for an almost entirely French team to a Tour de France stage winner and a mainstay of the team.

I kicked off the pod by asking about these early days and how his career on the road began. I also wanted to know what it was like coming full circle and ending up finishing his career in Australia’s own World Tour team, GreenEdge, a project that would never have come to life without his successes in Europe.

We also go back to the track to get into his Gold medal ride in Athens, a crowning achievement for the six-time Olympian.

Of course, I couldn’t not discuss his win Paris Roubaix. Stuey tells how the day unfolded, from puncturing in the Areneberg forest to winning alone in the Roubaix velodrome.

These days he has a new career as the race director at the the Tour Down Under, and I used the opportunity to find out what the job of race director really entails, as well as ask a few questions about what the future looks like for this much loved race.

There is so much to ask Stuey that it was honestly hard to cram it all into the hour, but it was great to be able to learn so much from someone who was a huge inspiration for myself, and go into detail about those unforgettable wins – I got the feeling that he enjoyed the chance to reminisce too!

So here it is, I hope you guys enjoy this as much as we did: Stuart O’Grady – The Pioneer of the New Generation.

Stay tuned for Talking Luft with Stuey next week!

Listen to this series on the Life in the Peloton website, at Spotify, Apple Podcasts, GooglePlay, Stitcher or your favourite pod app.

Check out episode sponsor Restrap – Yorkshire based makers of top quality, handmade and sustainable bike packing accessories. I used their bags on my bike packing trip riding the length of Sweden and can tell you I was blown away by the quality and functionality, every detail has been thought out. Whichever way you prefer to carry things on your bike, they’ll have a solution.

Use the discount code at checkout: PELOTON10 for 10% off your order. Shop now at restrap.com

Listen to our short spin off series Talking Luft presented by Rapha – much like DVD Extras, every second week.

LITP Cycling Caps: Jump over to our online shop to grab one. 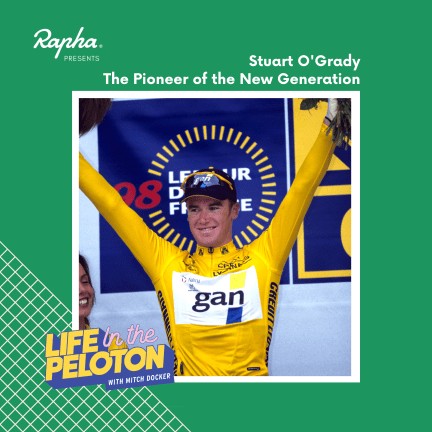